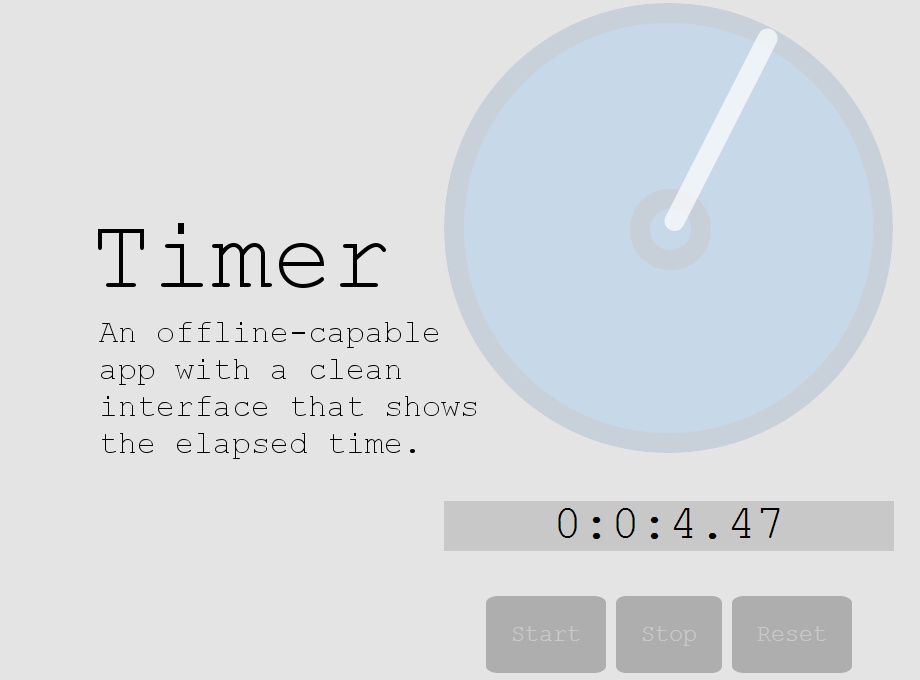 I spent the weekend cooking up a web app. It’s fairly simple. Three files serves up everything I need for a simple timer (a few more added so it could be published as a packaged app in the Chrome Web Store). I feel that I have followed the MVC design intent fairly well with a HTML file (for content organization), a CSS file (for beautification and some animation) and a Javascript file to handle the timer functionality. I learned quite a bit and the saying that I’m used to at my day job still applies: nothing is rarely ever as simple as it seems. Let me explain. I had to figure out and overcome some default behaviors for styling as well as how to implement my own timing function. I’m sure there is a library somewhere, but no better way to learn than to implement it yourself. I did find some great resources, which will be posted at the bottom.

The markup is short and sweet. Keep in mind that all of the imagery is pure HTML and CSS; no images were uploaded. I basically set a bunch of div elements up to arrange the second hand, the clock face and the control labels.

This was fun. I’ve used the transition and transform properties before, but combining this with keyframes opens up interesting animation possibilities.

To animate the hand, a JQuery selector adds this class:

I used JQuery to speed up development time and let me focus on the fun stuff: the timing! Since calculating times can be a bit tricky since I want the screen to continually update the elapsed time, since you know, I’m making a timer application! I accomplished this with the built-in setInterval() function. I feel that it is called often enough for a simple timer app (10 times / second). The interesting part on how the timing works is below. Note: Some variables were defined outside of the scope shown below. The main takeaway was how to deal with pausing and resuming the timer: a global variable $prevTime was used to store the total elapsed time, which was added to the current timer. Note: On the output, there should be a p wrapped around the formatTime($totalTime) call… something strange with WordPress’ text editor removing these.

I implemented a simple version of a printf-like function for the time format.